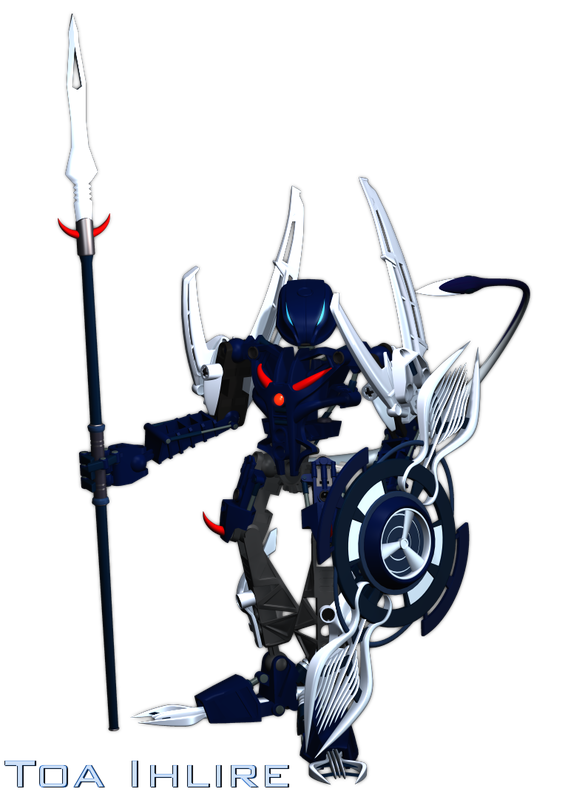 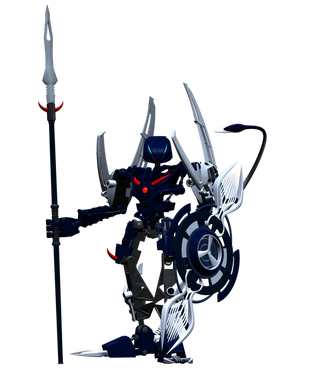 She came from a village on an island called Raka. When Matoran started disappearing from the village, she got banned when no real guilty person was found.
She became a warrior with powers that would be a match for even the greatest Toa. Her powers would allow her to live on land and under water. Ihlire has fought along side some great warriors and Toa, she is one of the few that has fought alongside the mysterious Dark Angel of the Fallen Skies.


Ihlire evolved into a fighter just as good as any Toa. Her weapons were a water sword and a spinner shield.
Years after she left her village she started traveling the many islands large and small. She met Kiriane on one of the smaller island who was being hunted by another bounty hunter called Irgawl.
Ihlire helped her defeat Irgawl and thus Kiriane joined her company.
Two months later on a larger island they met Fiaran, a trained soldier in the guard of the local tribe leader. Fiaran after being displeased with the dishonorable actions of his  master decided to team up with Ihlire and left his tribe behind.
The team, Ihlire, Kiriane and Fiaran after many daring attacks on the various Makuta controlling the islands became known as the Rahi-Raka, the "hunter beasts". When the Makuta on the smaller islands were to afraid to show themselves the team went east, towards the larger islands where they met Roras,  a traveler and philosopher who joined them on their travels.
Shortly after Yara, the quiet one, joined the team as well. They met Yara in the North mountains, Yara had already captured one Makuta all by her self after she raided his mining complex where hundreds matoran were being used as slaves.

The last addition to the team was Arkas, a cave dweller who after being driven from his cave system by countless of unknown cave-monsters decided to see the world.
The Rahi-Raka saw many victories against the Makuta for many years but after Roras was mortally wounded and took his place among the stars, the team started to break up. Yara was the first to leave and Arkas shortly followed. Both went back to their homelands.

When only the original Rahi-Raka were left, I Ihlire asked Kiriane and Fiaran to leave Kiriane responded she would not and Fiaran said he wish to stay for a couple of months longer before going home to check on his village.

For eight months Fiaran stayed with Ihlire as they were slowly moving back south but then he left. The Makuta who has sent spies after Ihlire now knew she only had one companion. Four Makutas from four different islands teamed up to capture her. Kiriane and Ihlire defended themselves as long as they could but in the end they were captured and brought to a very powerful Makuta on one of the larger islands. Makuta Kordax who captured them threw them in his dungeon promising they would never see the light of day again.
The dungeon was deep but it had many cracks in the ceiling and after a day Kiriane found the strength to fly up to have a look around, she found a way out and rushed back to find Fiaran.

Ihlire spent more than eight weeks in captivity, her only company was a small Xrivi bug and some old scripture on the wall.  After eight and a half weeks Kiriane came back with Fiaran who after coming back to his village discovered it in ruins. Only a few matoran who survived the slaughter could tell him how the leader went mad and ordered his guards to kill everyone before throwing himself of a cliff. Fiaran was sad but full of rage, this came in handy when Kiriane and Fiarans
stealth attack on Kordaxs mountain complex failed. They fought their way in a freed Ihlire, they took back her tools and fled into the woods below. Kordax quickly retreated with his two sergeants.

Ihlire, Kiriane and Fiaran were once again together on decided to keep doing what they had always done. They went east again, to new adventures but also to find Kordax.

Her transformation to Toa
In the hunt for Kordax and his band of devoted followers, the team came across many unnatural wastelands who became more common the further east they traveled on the large island of Copei.

They caught up with Kordax in a desert valley with huge cliffs. In the largest cliff a castle out of black rock had been carved out. The dead masks of the Matoran slaves used to build this monstrous complex were lying in the sand by the thousands. Kordax has sought refuge with the creature responsible for the destruction of lives. The creature was not from these lands, he was from a land beyond the great seas where only darkness reigned.
Ihlire and Fiaran were spotted by the guards and Kiriane who had been looking from a distance rushed in to help them. They fought their way in to the main chamber and faced the mighty creature. Kordax who was hiding behind a pillar in the huge cavern shouted they would never leave these halls alive.

But Ihlire defeated the creature running her blade through its neck from behind.  But Kordax was smart and grabbed the creatures lifestone before it faded. He took its power and became ten times more powerful than he had been before. Ihlire jumped the Makuta stabbing him in the back, wounding him badly. Kordax picked up Ihlire and threw her against the wall but then quickly retreated.

Kiriane and Fiaran stood beside her as Ihlire lay broken on the ground. Hopelessly they cried out for help but none would come. With her last breath Ihlire told Kiriane to find Kordax, put her blade inside the wound she had already made and to never take it out. Faith however had something different in mind, shortly after the light in Ihlires eyes had gone away and Kiriane and Fiaran were making their way towards the exit, Ihlires eyes started glowing again. The room became darker and Kiriane and Fiaran were slowly being pulled back towards Ihlires body. Their tools evaporated into a gray dust and the darkness had completely surrounded them. Three figures were now hanging in the air, a twister of sand from the desert swept through the cavern and the supporting pillars holding the ceiling started to crack. Winds pulled on the three figures as they each started glowing. They lights, one blue, one green and one red started shining brighter, they were shaking as being pulled apart by the strong winds. Suddenly the wind died down and so did the lights. The darkness vanished and three figures dropped down to the floor.
Toa Ihlire, Toa Kiriane and Toa Fiaran were born.

The three figures looked at each other, bewildered and surprised. The pillars who had been the only things holding up the ceiling of the cavern had been greatly weakened and started falling. Ihlire, Kiriane and Fiaran started running towards the exits with speeds only a toa could manage. Seconds after they ran outside into the sand, the mighty black palace collapsed in an explosion of dust.

After these events, the Toa Rakas (the hunters) continued their search for Kordax meeting many new and dangerous creatures on the way. But also old friends and new ones.
This is the tale of the Toa Rakas. 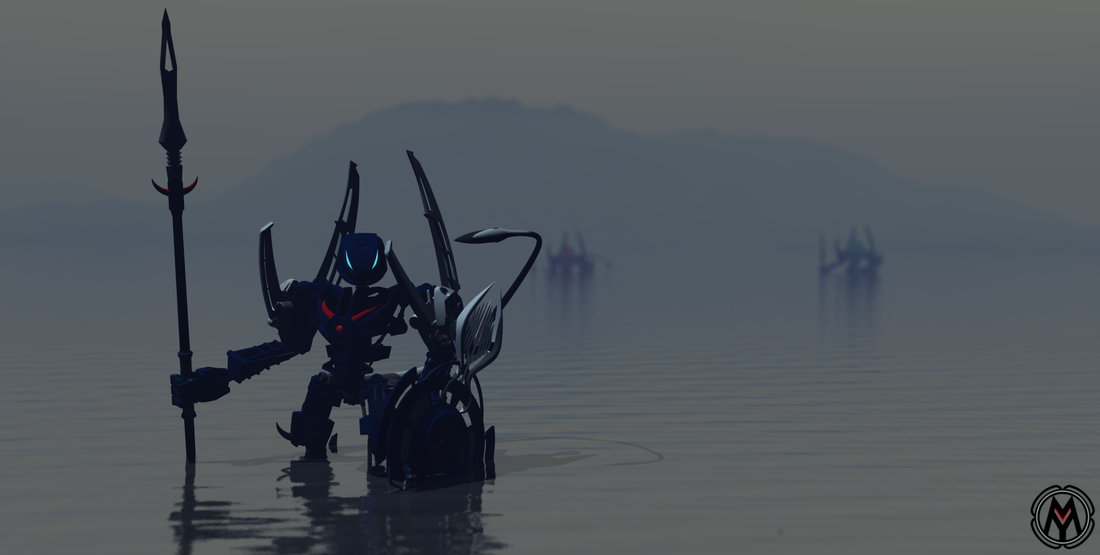